Few aspects of product development have seen more innovation in the past decade than lighting design. Legislation and consumer demand have hastened the evolution of energy efficient solutions and programmable software now enables infinitely customisable lighting scenarios. Architonic examines some shining examples of products and projects that demonstrate the diverse and unusual possibilities offered by these new technologies. 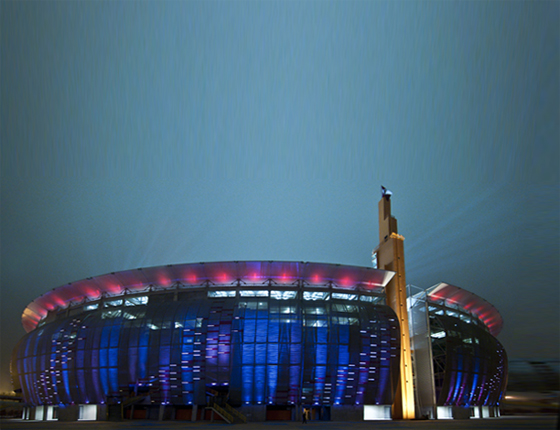 The façade of the Peru National Stadium in Lima by Cinimod Studio translates the atmosphere inside the arena into patterns of light; photo © Cinimod Studio Ltd

Good lighting can bring out the best in people and buildings alike. Spotlights can enliven distinctive features, while soft lighting creates a sense of mystery and intrigue. Specifying suitable lighting is vital to the success of any project and contemporary products offer limitless options for colour, movement, integration and interaction. 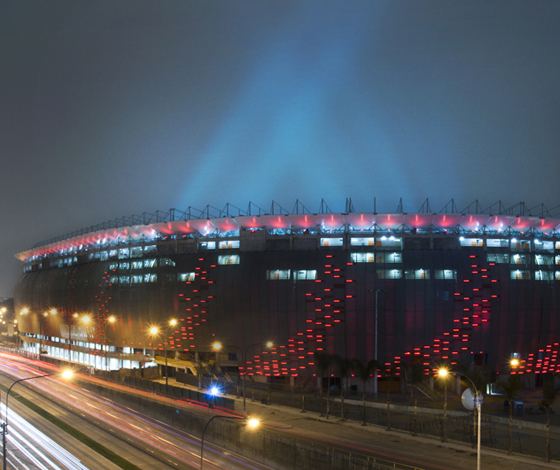 One of the key recent developments in lighting design is that of interactive solutions facilitated by sophisticated software that can produce responsive displays of any scale. For the Peru National Stadium in Lima, London-based Cinimod Studio designed an illuminated façade that reacts to the mood of the spectators inside the stadium. Cinimod Studio claims the building features “what is probably now the largest crowd controlled interactive lighting display in the world” – a system of architectural LED lights linked to custom-designed software that translates data gathered by sound meters integrated into the stadium’s roof line into a real time “mood state” that can be seen by those outside. 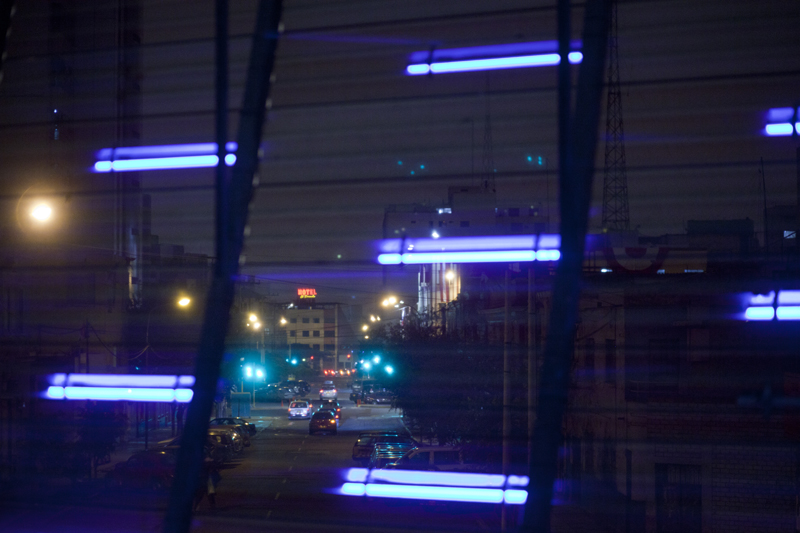 Each light contains a row of LEDs that act as pixels, allowing flexibility and control of the light output; photo © Cinimod Studio Ltd

Mood settings range from boring through disappointment, excitement and celebration and are delivered by an E:cue lighting control system linked to RGB Media Tube lights from Traxon, which enable colour variation and pixel specific control. The fittings were integrated into the form of the structure, sweeping around the façade in a flame-like pattern and coming alive as the noise inside surges or drops. 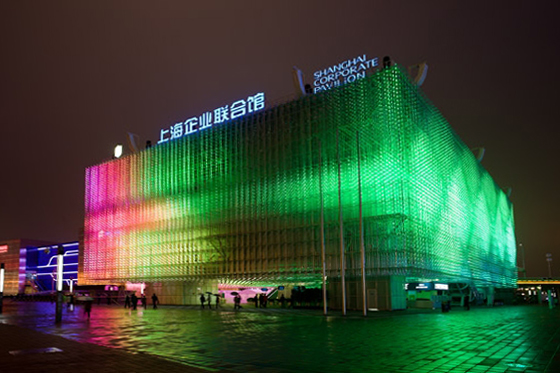 Over 65 kilometres of polycarbonate tubing filled with LEDs formed the surface of UNStudio’s Dream Cube pavilion during the Shanghai World Expo 2010; photo by Basil Childers

Interaction between the building and its users was the basis of ESI Design’s Shanghai Corporate Pavilion at the World Expo 2010. Known as the “Dream Cube,” the pavilion provided a participatory experience in which the exterior surface formed by a huge lattice of LED-filled rods responded to the movements of visitors inside the building. 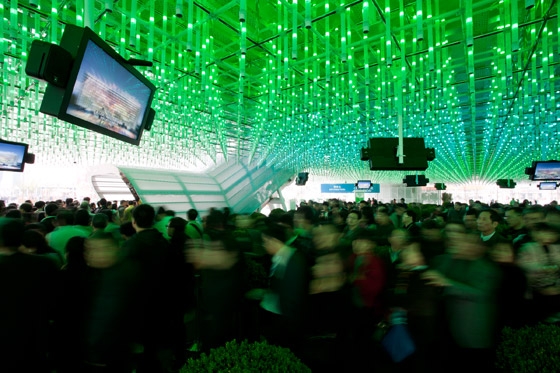 An escalator transported visitors from the entrance into the heart of the structure; photo by Basil Childers

Entering underneath a pulsating ceiling of LEDs, visitors were unaware that the fluid patterns of light were the result of the movement of other people interacting with a participatory film in a ‘control room’ at the heart of the building. 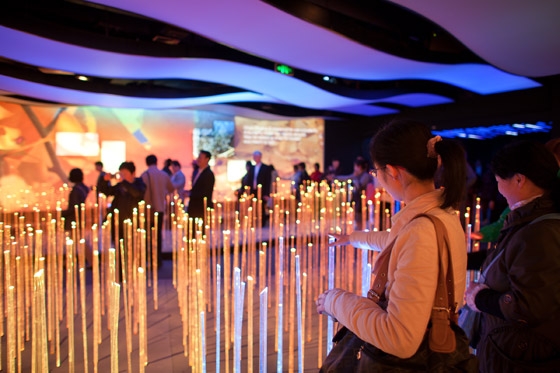 A field of motion sensitive rods provided the first opportunity for interaction inside the pavilion; photo by Basil Childers

A 20-minute journey through the Dream Cube offered a visual narrative of Shanghai’s history, incorporating crowd-sourced images presented on OLED monitors and culminating in the Dream Cube Control Room. In this circular theatre, HD projectors filled the entire wall with a presentation designed to encourage visitors to wave and clap in unison, stimulating the sensors that would then translate data into a live abstract animation to be displayed across the exterior surfaces. 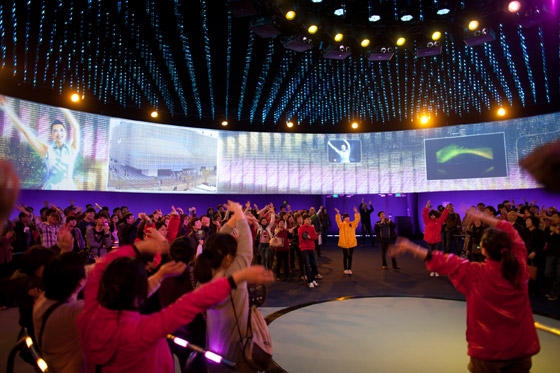 The engaging application of intelligent lighting suited the pavilion’s purpose as a temporary venue for entertainment and education, managing to assume its own dynamic personality and to provide its audience with a memorable experience. 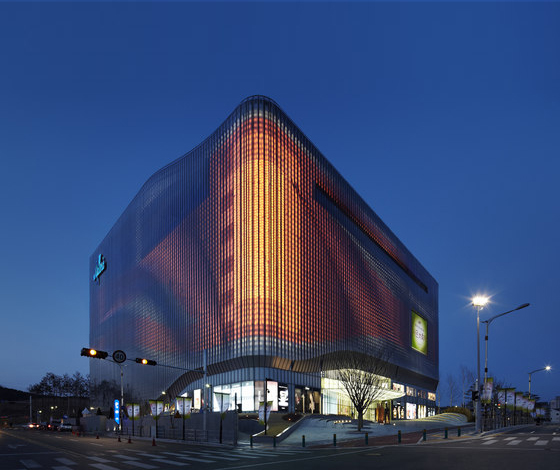 Light and movement can help a building to stand out from the crowd; something that is vital in the retail industry. Prominently located in the heart of the city of Cheonan in Korea, UNStudio’s Galleria Centercity Department Store features a media façade whose purpose is to attract visitors’ attention through the subtle animated lighting. During the day the double-layered construction of the façade creates a moiré effect, lending the building an ambiguous, shifting physicality that is continued into the evening by the fleeting projections of light. 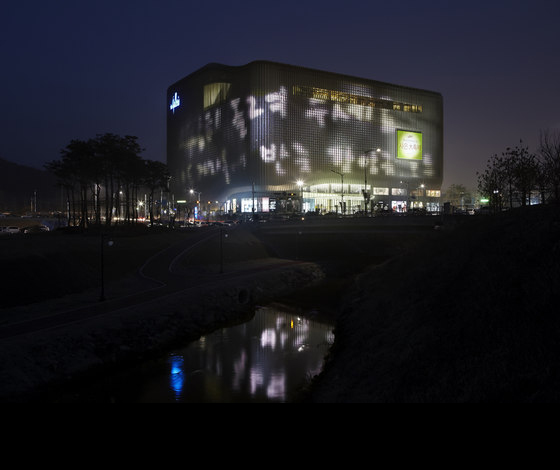 UNStudio developed custom animations based around themes such as fashion, art and public life to be displayed on the façade; photo © Kim Yong-Kwan

The architects worked closely with lighting design firm ag Licht and specialist lighting providers Zumtobel to embed 22,000 LED light points into the smooth 12,600 square metre surface. The luminaires are controlled by software that generates shimmering patterns and animations, which flow variably and endlessly around the structure. The lighting design was carefully considered from the outset and was therefore integrated into the layered construction of the façade meaning that it is invisible during the day and projects onto the inner skin at night time, creating a diffused effect and minimising glare. 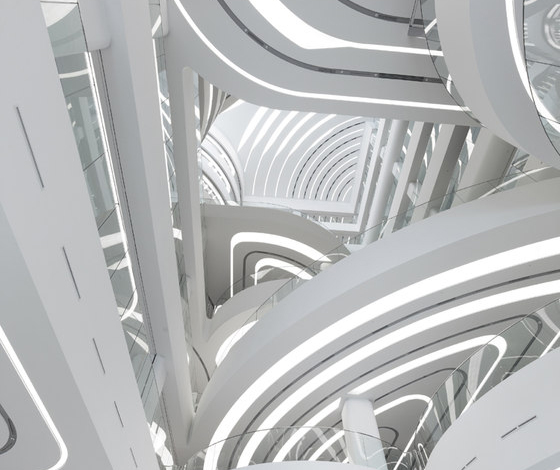 Lighting has also been deployed to dramatic effect inside the Galleria Centercity. The layers of rounded plateaus that radiate from the central void incorporate coiled strip lighting in their undersides, producing a dramatic and dynamic effect when viewed from below. Continuing the theme of fluidity that defines the building’s exterior, the interior lighting is designed to encourage circulation and to create an organic, constantly evolving visual aesthetic. 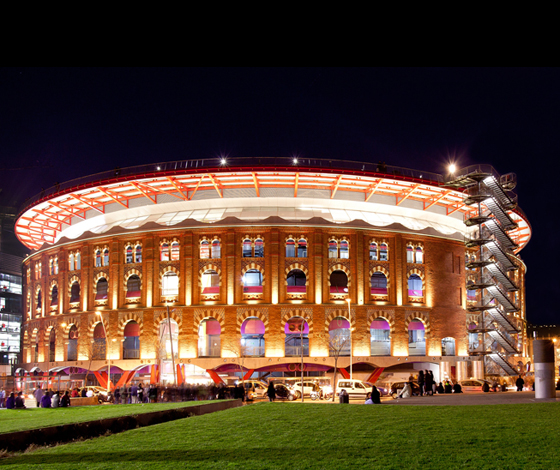 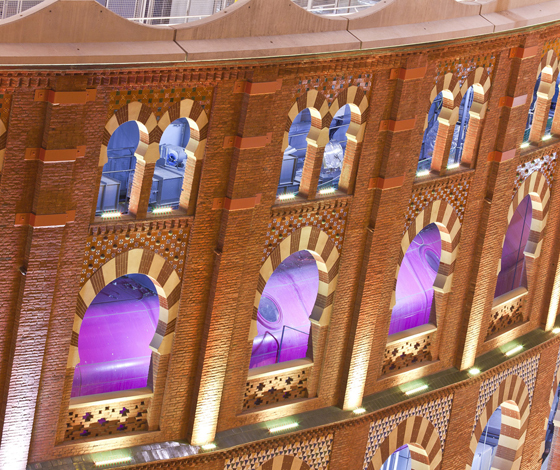 Every light on the building’s façade can be individually controlled using customised software; photo © LEDS-C4

Developments in LED technology now allow architects and lighting designers to specify flexible solutions that can meet the diverse requirements of multi-use projects. When Spanish lighting specialists LEDS-C4 were asked to devise a comprehensive lighting scheme for the newly redeveloped multipurpose Las Arenas complex in Barcelona, they designed a bespoke programmable system that enables the colour and intensity of light directed at every archway and column to be adapted to suit different scenarios and events. 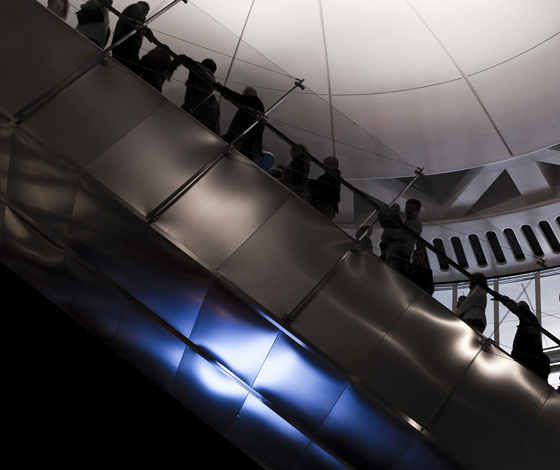 The 27 metre-high vaulted dome ceiling is lit from below to emphasise its scale and diffuse light evenly; photo © LEDS-C4

Architecture practice Rogers Stirk Harbour + Partners undertook the repurposing of the nineteenth century bullring, maintaining its iconic façade and introducing 47,000 square metres of internal floor space for shopping, entertainment and leisure facilities. Interior passageways are washed with uniform light provided by over 300 Ray projectors, while the development’s most striking feature – a 76-metre-diameter domed roof – is illuminated by 150W metal-halide projectors, which were carefully integrated into the structure of the building to give the impression that the ceiling itself is a giant vaulted luminaire. 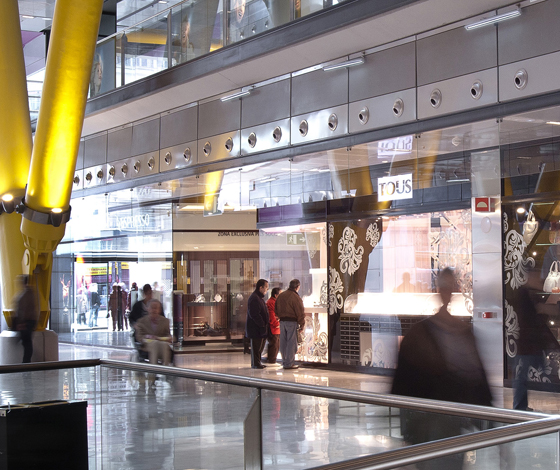 Elsewhere, architectural elements such as the enormous supporting columns are individually lit and in the fourth floor gym fluorescent linear projectors provide indirect lighting, creating a suitably chilled out mood whilst not detracting from the panoramic views of the city. 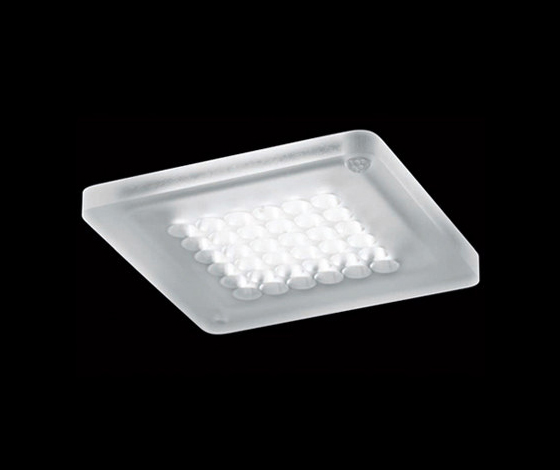 Nimbus1 Products incorporating light emitting diodes such as the LED.next range from Nimbus look set to dominate the future of interior lighting.

In recent years interior lighting has also undergone a radical overhaul as manufacturers have been forced to develop innovative and unique products in response to tighter regulations governing energy consumption. Incandescent bulbs are gradually being phased out in many countries, with light emitting diodes (LEDs) touted as the most likely future alternative.

While early LED models provoked concerns over their brightness and rather sterile light quality, manufacturers such as the German Nimbus Group have invested in creating solutions that offer “a high light output,” colour temperature that “gives the same cosy feeling as light bulbs did in days gone by,” and the added benefit that LED lighting “does not attract insects.” 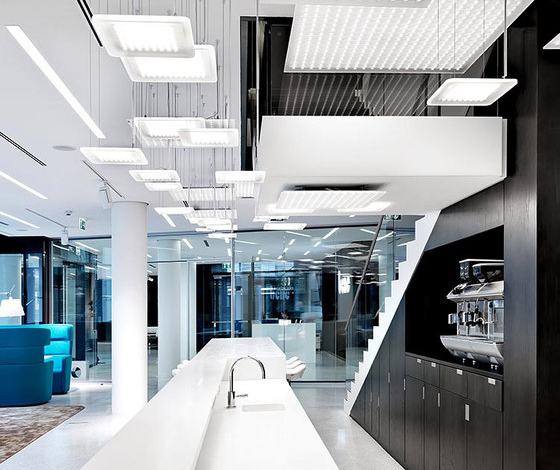 A ‘cloud’ of LED fixtures hangs in the entrance of furniture brand Bene’s Vienna showroom.

Nimbus have applied their knowledge of LED technology to a wide range of large scale and smaller commercial and domestic projects, including the creation of a suspended ‘cloud’ of LED fixtures in the Vienna showroom of office furniture supplier Bene, designed by Austrian practice Solid Architecture. 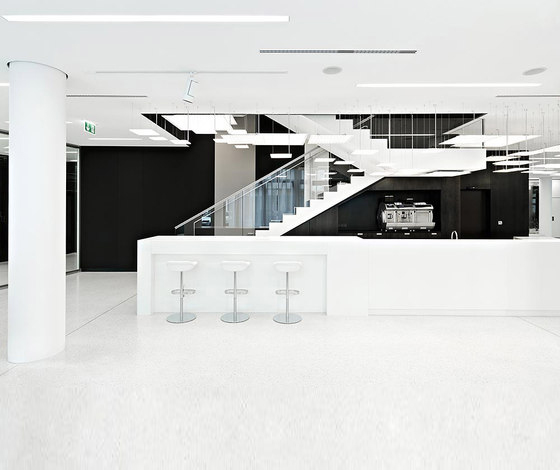 The lighting installation follows the central staircase, uniting the different levels within the space.

Hanging at different heights, the LED modules illuminate the staircase that rises through the core of the building; their thinness creating the impression of floating sheets of light. The possibility of dimming the installation means the mood of the space can be easily altered for evening events and entertainment. 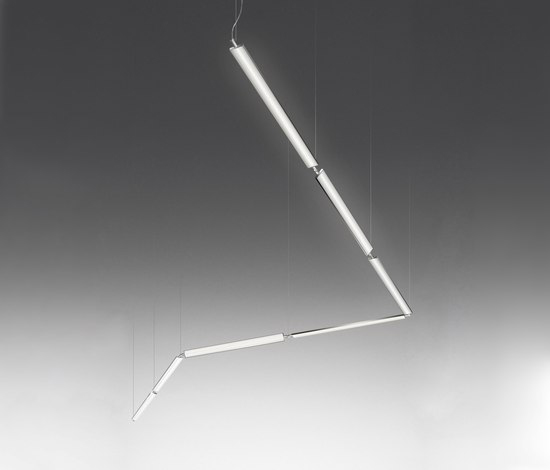 The suspended version of Carlotta de Bevilacqua’s Pad System for Artemide was designed to solve problems associated with office lighting.

Architects specifying products for large office projects have been pioneering the use of LED technology because of its even light and low energy usage, which, when multiplied by the number of fixtures in a large office, equates to significant savings in energy and money. Designer Carlotta de Bevilacqua’s Pad System for Italian lighting brand Artemide is intended to replace fluorescent tube lighting in such scenarios and responds to the needs of office workers by enabling the height, angle and light diffusion to be adapted to suit each workplace through variations on hanging, recessed and task lighting. 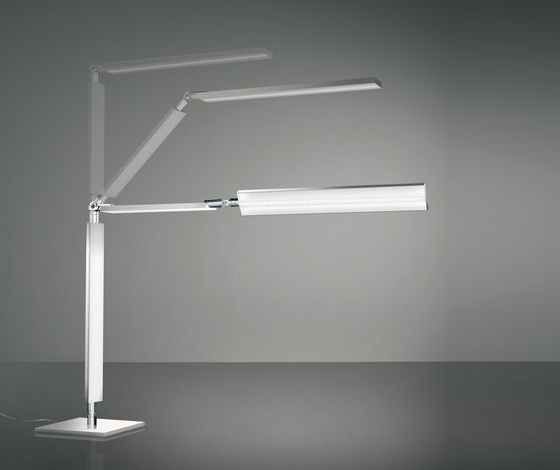 The simplicity and size of the LED light mean the design can be slimline and easily adjustable.

Strips of LEDs are diffused by a translucent plastic outer shell, while the lightweight aluminium housing and hinges with an angular excursion mean the lights can be rotated almost 360°. The system demonstrates the key reasons why LEDs are well suited to workplace applications: energy efficiency, compact dimensions, low maintenance requirements and even and adjustable light output. 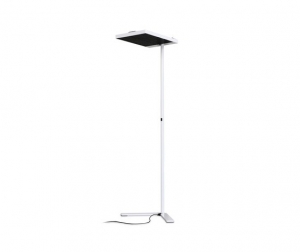 The XT-A range from Tobias Grau features a grill designed to reduce glare from the light source.

Another company that is progressively exploring the potential of LED technology is the German brand Tobias Grau, whose XT-A range tackles the issue of glare, a common problem among LED luminaires. The LEDs in the XT-A lights are shielded by a lattice containing parabolic openings that distribute an even light and prevent the light source from being directly visible from most angles.

The possibility of combining LED technology with programmable software can be useful indoors as well as for creating external lighting effects. In Tobias Grau’s XT-A floor lamp a motion sensor can direct light towards the user, while the brightness can be set to adapt automatically to the ambient light conditions, reducing power consumption by fifty percent. 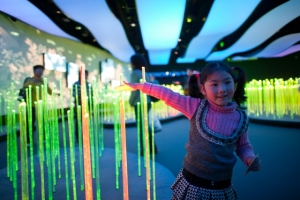 Whereas exterior lighting products look to be getting brighter, bolder and more dynamic, interior solutions are becoming more unobtrusive, integrated and intelligent. Future developments in lighting will be determined by evolutions in hardware and software, enabling almost any surface to become a luminaire and allowing genuine customisation and programmability. Some technologies may remain suitable only for commercial applications but others will gradually become available and affordable for use in domestic projects. The challenge for manufacturers and designers is to identify genuine problems for these new products to solve, to avoid burdening us with flashy interactive gimmickry and to ensure that our relationship with lighting becomes more intuitive and enjoyable.